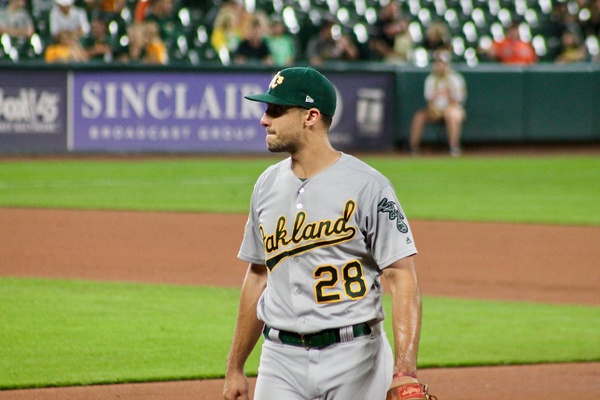 The New York Yankees have a long and storied history of stellar first base play. The names read off like a list of Cooperstown residents and would-be occupants: Gehrig, Mattingly, Martinez, Skowron, Teixeira and Giambi. Is Matt Olson next on this list? Let’s talk about it.

The Bird Was the Word

Greg Bird was supposed to join that list. He had it all. A sweet lefty swing built for Yankee Stadium, and so too for October’s grandest stage. But injuries and poor play led Bird down a disappointing path once traveled by Nick Johnson. Bird hasn’t been back to the Show since 2019, bouncing around multiple minor league pit stops.

Bird’s disappointment led Yankees GM Brian Cashman to acquire Luke Voit from the Cardinals in 2018. Cashman and the Front Office felt Voit was a diamond in the rough, a player whose tendencies would lead him to be a good hitter. Voit’s shown flashes during his time with the Yanks, winning the home run crown in the truncated 2020 season. He’s also battled injuries since arriving, only once playing more than 100 games in a season (2018).

Rizzo’s Flash in the Pan

Voit’s inability to consistently stay on the field in 2021 forced Cashman to make a deal, trading for the Cubs’ Anthony Rizzo. Rizz was a hit before he even played his first game in Pinstripes. He peppered balls over the Stadium and brought a defensive presence to the field not seen since Donnie Baseball. His infectious enthusiasm and joy was welcomed in a clubhouse that seemed otherwise downtrodden and listless at times. He was fun to watch. And now he’s a free agent at 32. If the years and dollars make sense, I’d be happy to see Rizzo back whenever players report to Tampa.

But a scroll through Twitter often connects the Yankees to two names: The Braves’ Freddie Freeman and Oakland’s Matt Olson. Freeman is a free agent after leading Atlanta to their first World Series title since 1995, forever a legend in Atlanta. He’s a potential Hall of Famer. But he’s also 32. It’s hard for me to imagine any situation where Atlanta and Freeman don’t find common ground on a deal. But, like I often tell my kids, the world is a strange place.

Now that brings us to Olson. An in-his-prime player with an MVP in his future. He’s 27 and bats left handed, which this Yankees lineup desperately needs. Olsen slashed .271/.371/.540 with 39 home runs and 111 RBI in 2021. He was among the league’s best in BB% (13.1 %) and xwOBA (.378). He’s a two-time Gold Glove winner, and would be a welcomed defensive addition to the Yankees’ infield. If I’m Brian Cashman, I’m giving Oakland any prospect not named Volpe or Dominguez to try to make Olson a Yankee.