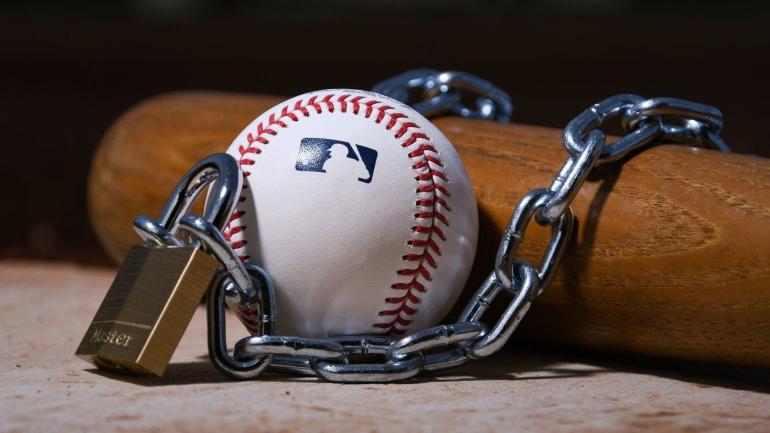 Despite hours and hours of face-to-face negotiations and a fun night of optimistic tweets that brought a bit too much false hope to baseball Twitter, the inevitable has occurred. This afternoon, Major League Baseball and the Players’ Union reached a stalemate and left the bargaining table with no plans to return. The owner-imposed lockout continues indefinitely: the league has unilaterally canceled the first two series of the regular season, and we have no idea how many games will be played in 2022, if at all. So now, to answer the question in the title: we wait. How long? No one knows for sure, but given the high level of anger amongst the players at the moment, it’s safe to say that we’ll be waiting for a while. Look no further than our favorite true outcome king, Joey Gallo.

Maybe he can work on hitting the ball the other way a tad. Alternatively, maybe he can develop a onesie that doubles as a uniform so he doesn’t need to worry about the way he gets dressed. Either way, I can say with 100 percent certainty that we both excel at striking out, and there’s little chance of either of us changing that at all in the near future.

Jokes aside, it looks like the crack staff here at Pinstripe Perspective isn’t going to have much to write or talk about in terms of actual games for the foreseeable future. And while saving our readers from yet another rant about how the owners are destroying the long-term health of the game of baseball, let me just add my very original thoughts in exactly two words: this stinks. (Side note: I have a feeling that we’ll be hearing a lot about this government organization in the coming weeks)

On the bright side, there is a lot to look forward to if and when the stewards of the game finally get their act together. As Robert Coles wrote back in December, things haven’t materially changed that much for the Yankees since the extremely demoralizing Wild-Card-Game exit, as Hal Steinbrenner staged what I can only assume was a silent protest of the rest of the owners’ drunken spending spree before the CBA expired. I mean, it is absolutely wild that a total of $2.16 billion was spent on player contracts throughout the league and all the New York Yankees did with their (now alleged) big league roster was re-sign Joely Rodriguez, but I digress.

The silver lining, however, is that eventually the Yankees will have to make a flurry of roster moves, and they must do so quickly. The team needs to acquire a major-league ready shortstop, first baseman, outfielder, and starting pitcher, all within a week, probably. Carlos Correa, Freddie Freeman, Trevor Story, Carlos Rodon, Matt Olson, and Matt Chapman will be among the names appearing in your timelines every half hour at minimum. Even Andrelton Simmons will be floated around. And who will inevitably return on a one-year deal in the $5 million range? Yup, this guy.

The Yankees will also be a good baseball team this year. No one should be under the illusion that they’ll win over 100 games, but ZiPS has them winning the AL East as currently constructed. With the new additions, barring complete disaster, which would be much worse than last year’s roller coaster of disappointment, we’re due for another meaningful summer of baseball in the Bronx.

The elephant in the room, obviously, is that we have no idea when this will all start, and there’s nothing we can do about it. Meanwhile, the NBA is as competitive and exciting as ever, the NFL Draft Combine kicked off this week, and for the soccer junkies like me out there, the MLS season kicked off this past weekend, the European club seasons are headed into their homestretch, and the final round of World Cup Qualifying commences at the end of March. Also, Formula 1 gets underway in Bahrain on March 20th with new rules and regulations as a determined Lewis Hamilton seeks to reclaim the World Championship from Max Verstappen.

And oh yeah, there’s still plenty of baseball. Perhaps we’ll see Bryce Harper take the field in NPB for Hideki Matsui’s original squad, the Yomiuri Giants. If Harper chooses not to go overseas, turn to the KBO to catch our old friend Mike Tauchman, who’s expected to put up big numbers for the Hanhwa Eagles. For those in the New York area, head over to Staten Island to catch a FerryHawks game as they embark on a brand new journey in the Atlantic League.

Of course, our sister site, Pinstriped Prospects, will have wall-to-wall coverage of every level of the Yankees’ minor league system. Get to know the guys not named Jasson Dominguez, Anthony Volpe, and Luis Gil. Follow Rachel Balkovec’s groundbreaking maiden voyage as manager of the High-A Tampa Tarpons. One of the few good outcomes of this lockout is that there will be dramatically increased media attention on the minor leaguers, every single one of whom should be paid a fair, living wage.

So sit back, relax, and savor the void. There will be many more meetings. The accredited journalists will send many more tweets that include the words “heated,” “contentious,” and “unproductive.” But there’s plenty out there to enjoy, and whenever MLB returns, we will be ready.