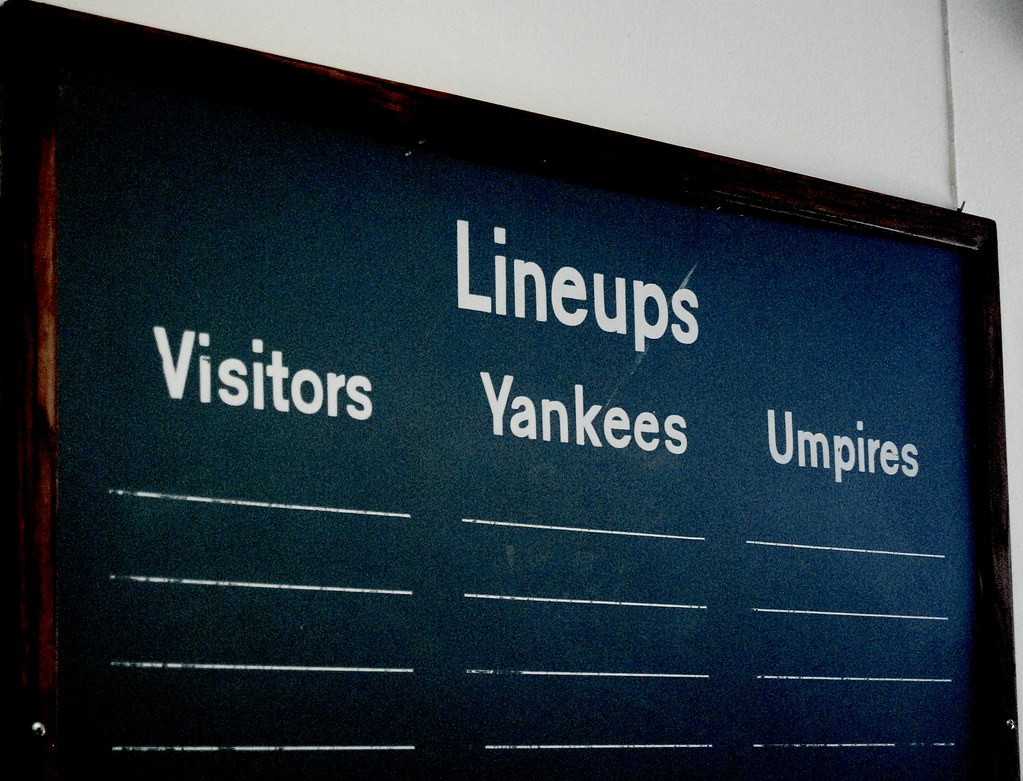 Over the past few days the last of the Yankees roster cuts have trickled in and the Opening Day roster for the 2022 MLB Season is now set. Friendly reminder that the rosters have been expanded to 28 players until May 1st to accommodate the shorter Spring Training schedule as a result of the lockout. The team managed to make it through the spring circuit without any major injuries which is more than can be said about years past. Let’s take a look at the roster the Yankees will use to start the year.

The Yankees will carry two catchers to begin the year. Higashioka has been an absolute monster in the spring, batting .423/.464/1.231 with seven home runs and 11 RBI’s. Trevino was just acquired this past weekend in a trade with the Texas Rangers. The Yanks are going all in with defense behind the plate as they look to move past the Gary Sanchez era. Hopefully Higashioka’s spring tear is a sign of things to come, otherwise we may be looking at one of the worst offensive outputs from the position in the league.

Five starting caliber players for four spots. DJ LeMahieu will be the floater here, splitting time between first, second, third, and perhaps DH over the course of the year. Gleyber will split time at second with LeMahieu. He is also the de facto back-up shortstop, which is kind of hilarious but equally terrifying. I don’t see him getting consistent time there, but it is not out of reason to expect him to start 20-25 games there this year. Rizzo, Donaldson, and Kiner-Falefa will get the majority of the playing time at their positions.

In a somewhat surprising but not entirely unexpected move, the Yankees optioned presumed fifth outfielder Tim Locastro and are going with just four outfielders to begin the year. I am all for it. This shows the Yankees commitment to rotating Gallo and Judge into center. It also shows commitment to playing Stanton in the outfield consistently. Isn’t it exciting to list Stanton as an outfielder and not strictly a DH? History shows this group isn’t the most durable so chances are we’ll still see more Locastro than we care to admit. For Opening Day though, this is the group.

The Yankees are starting the year with a three man bench, and a big reason why is Marwin Gonzalez’s versatility. Gonzalez has been terrible the last two years but his .375/.400/.792 line that he posted this spring won him a big league job. The switch-hitter has major league experience at every position on the field except catcher (yes, he pitched once too). A productive year from Marwin would be a huge win for the Yankees as found money. The Yankees will need to open a 40-man roster spot to accommodate Marwin. My guess is either a Jeisson Rosario DFA or a Miguel Andújar trade is coming. We’ll see.

No surprises here. Cole leads the way as the ace of the staff and will start Opening Day against the Red Sox. Severino is healthy on Opening Day for the first time since 2019. Montgomery is looking to build on a strong 2021 campaign. Taillon is recovered from ankle surgery and ready to rock in a contract year. Cortes came out of nowhere last year and has claimed a spot in the rotation. There is definitely a lot of risk with this group. Outside of Cole and Montgomery there is nobody you can trust to be both consistent and healthy. Hopefully those fears are alleviated early. If not, the Yankees will be doing a lot of scrambling to fill their rotation after choosing to not add a starter this winter.

Wew. If this seems like a lot it’s because it is. The Yankees have chosen to go with a 16-man pitching staff to start the year which means 11 relievers. It makes sense given the injury and workload concerns in the rotation, but still. Lots to keep track of here.

Chapman, Loáisiga, Green, Peralta, and Holmes make up a loaded back of the bullpen. There was never any doubt of those guys making the roster. Chapman is in the final year of his contract with the Yankees and looking to build back his value after a rocky 2021. Jonny Lasagna blossomed into an elite relief option last year and mostly just needs to stay healthy to be excellent again. Green, like Chapman, is entering his walk year and looking to deliver another steady hand season before he cashes in next winter. Holmes and Peralta are looking to build on their surprising breakout 2021 campaigns.

King, Luetge, and Castro will make up middle relief for now. King may be the next great reliever story for the Yankees, as he looked to be breaking out at the end of last year. Luetge was a surprise last spring and somehow lasted the entire year on the roster. It was his first big league action since 2015. If he turns into a pumpkin, so be it. The Yankees already won this signing. Either way, props to Luetge for making it back and sticking around. Castro was acquired from the Mets over the weekend and will act as the low leverage version of Clay Holmes for now.

Marinaccio, Schmidt, and Sears won the last three spots this spring. Marinaccio has the stuff to stick around. He is downright filthy which is why the Yankees protected him from the Rule 5 draft that didn’t happen this offseason. Schmidt, a starter by trade, is a former first rounder who has struggled to stay healthy. He has shown some flashes of brilliance this spring after going through the Matt Blake pitching lab. It will be interesting to see if the Yankees stick with him as a reliever if he has early success or transition him back into a starter given his injury history. Sears is also a starter by trade and struggled this spring. He will likely be the last guy out of the pen in April.

There really aren’t many surprises here. I am feeling cautiously bullish about the team. The catching situation is going to be a huge upgrade defensively but boring as hell to watch with the bat. I hope i’m proven wrong. I don’t want to go through the second coming of the Chris Stewart era. The infield defense is going to be so much better than last year, and I am feeling optimistic about DJ and Gleyber to start the year. I am excited that they are going with the four outfield rotation and planning to utilize Judge and Gallo in center when needed. If they can keep all four guys healthy that outfield is going to rake.

The starting pitching concerns me. The rotation has depth if everyone is healthy and performs but it could just as easily blow up. I’d like to think the Yankees have enough interesting arms in the minors to figure it out short term if it does. They should have just added a couple reliable starters so we didn’t have to worry but I digress. The bullpen is stacked and the Yankees churn out power arms every year. I don’t really have any worries there. A bounce back year from Chapman would really be appreciated, though. I am interested to see if King can blossom into an elite arm. I also can’t wait to see what Schmidt and Marinaccio bring to the table.

All this being said, chances are this team will look entirely different on the last day of the year than it does now. It always does. Getting caught up in roster construction right now is a fools errand. The Yankees got through spring healthy and that is what is most important. I’m tired of worrying about who they did and didn’t acquire. The roster is set so let’s play ball.