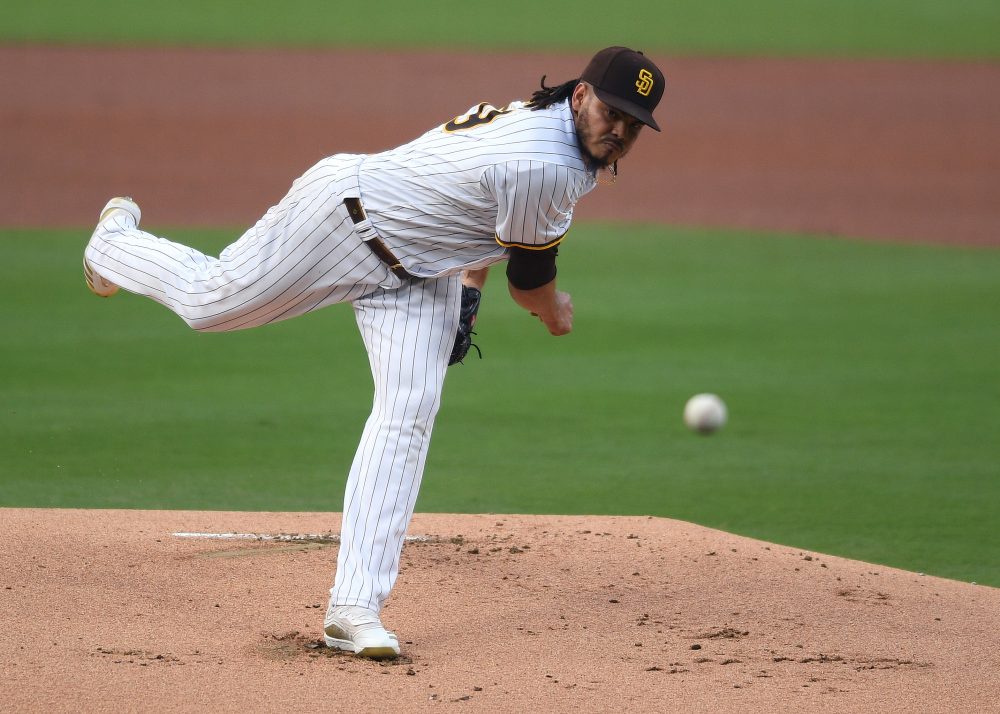 The August 2nd trade deadline is nearing so between now and then we will be highlighting some players that the Yankees might potentially target in trade talks. Today we will be focusing on Padres right hander, and a personal favorite of mine, Dinelson Lamet. Let’s take a look at what Lamet has to offer.

Dinelson Lamet originally signed with the Padres in 2014 as a 21 year old during International Free Agency. This was two years after he had his original deal with the Philadelphia Phillies voided due to issues with his documentation. Lamet proceeded to fly through the Padres system, reaching the majors after only two and a half seasons. He debuted with the Friars in 2017 and put up a 4.57 ERA (4.35 FIP) across 114.1 innings and 21 starts as a rookie. His 10.94 K/9 (28.7 K%) was a testament to the raw stuff he had but his 4.25 BB/9 (11.1 BB%) showed he didn’t exactly know where it was going.

Dinelson was unable to build on his promising debut. A right elbow strain in Spring Training of 2018 led to Tommy John surgery that kept him out of action until mid way through the 2019 campaign. When he came back it was as if he missed no time at all. In 14 starts after returning Lamet pitched 73 innings to the tune of a 4.07 ERA (3.91 FIP). His average fastball velocity jumped from 95.1 mph to 96 mph, his K% jumped to 33.5%, and his BB% dropped to 9.6%. At this point I was all aboard the Dinelson Lamet wagon and drafted him in all my fantasy leagues going into 2020.

It all clicked in the pandemic shortened season. Lamet took it all to another level. Look at these stats and where they ranked in the majors amongst starting pitchers:

The baseball savant chart is even sexier:

The walks were still a bit too high (2.61 BB/9, 7.5 BB%) but dramatically improved from earlier in his career. This all amounted to a 4th place finish in Cy Young voting. I know we don’t really count 2020 as a real season (sorry Dodgers fans), but it was an impressive showing nonetheless.

That all seems like a lifetime ago at this point. Last year Lamet morphed back into his 2017 self. His fastball velocity went down about two ticks, his strikeouts were at a career low of 27.3%, and his walk rate jumped back up to 10.5%. He was twice placed on the injured list with right forearm inflammation. The Padres ultimately gave up on him as a starter and moved him to the bullpen. All things told he pitched 47 innings across 22 games (nine starts), posting a 4.40 ERA (3.94 FIP). Quite the step back it was.

Coming into 2022 Lamet was on the outside looking in. The Padres came into the season with more rotation options than there were spots so he remained a reliever. Dinelson only made the Opening Day roster due to the expanded rosters the lockout created. On May 13th he was optioned to the minors and outside of a brief call up earlier this month he has spent the entire season there. His stats:

Not so pretty in the big leagues. Signs of life in the minors. These two graphs tell a story:

Lamet’s spin rate is down considerably since 2020. The horizontal movement on his deadly slider is down almost 2 inches as well even with the slight bounce back this year. Maybe its Spider Tack. Maybe it’s the injuries. Maybe it’s both. Whatever the root cause, it’s been an ugly crash back to earth since his peak in 2020.

Shield your eyes. As I am sure you could have picked up on based on everything above, it has not been pretty.

As alluded to earlier, the consistent battle with the injury bug has turned Lamet into a full time reliever. Perhaps the Yankees would have some interest in trying him as a starter again but history suggests he wouldn’t hold up. Lots of arm trouble on Lamet’s resume.

Dinelson Lamet is making $4.775 million this year in his third trip through arbitration. Given his prior history and success as a starter his salary is inflated. For this reason there is a decent chance he will be non-tendered this offseason if he remains in San Diego.

Lamet is scheduled to become a free agent after the end of next season though having spent a majority of the season in the minors it’s possible it is delayed another year. He has a full minor league option left after this year, meaning if the Yankees trade for him they can shuttle him between Scranton and the majors next year if they wish.

What would it take?

I wrote this for one reason and one reason only. Joey Gallo. The Padres have long been interested in the Yankees struggling slugger. Their outfield right now consists of Jurickson Profar, Trent Grisham, and Nomar Mazara. They could definitely use another outfielder. Hence their interest in Juan Soto. Even with Gallo’s struggles he presents an All-Star upside. I’d imagine the Padres would still have some interest given the low cost. A Gallo for Lamet swap makes sense.

Even if the Padres don’t want Gallo it won’t cost much if the Yankees are interested. The baseball trade values website lists Lamet as a negative value. That’s not unrealistic. Given his struggles and bloated salary it wouldn’t cost the Yankees more than a C-level prospect or two. Heck, the Padres might welcome a straight salary dump.

Does it make sense?

In my opinion, yes. A one-for-one Gallo for Lamet swap addresses the depth needs of both teams. It would be a change of scenery deal for both guys and gives both teams a player with All-Star upside.

The Yankees lack pitchers with options on their 40-man roster. Luis Gil, Yoendrys Gomez, Deivi Garcia, Stephen Ridings, and Luis Medina are all either injured, ineffective, or not ready for the majors. JP Sears has one option left this year before he can’t be optioned again. Ron Marinaccio can be optioned but belongs in the majors. Clarke Schmidt, Domingo German, and Jonathan Loáisiga are the only others who can be optioned. The flexibility is limited. Lamet would give the Yankees an arm they can shuttle up and down both this year and next.

There is no hiding the recent ineffectiveness. It has been almost two full calendar years since Lamet has been the best version of himself. His patented slider has lost its bite and his fastball is down a few ticks. However, the strikeout numbers are still there and somewhere in that arm is the electric stuff we saw a few years ago. Get Dinelson in the lab with Matt Blake and maybe he can rediscover some of the lost magic. If anyone can bring the best back out of Lamet it’s the Yankees.

Worst case it doesn’t work out and they non-tender him this offseason. Best case they get a dominant bullpen pitcher. I was interested in Lamet even before the Michael King injury. My interest is even higher given that news. For a bullpen short on options, taking a swing on Lamet is worth the potential payout.