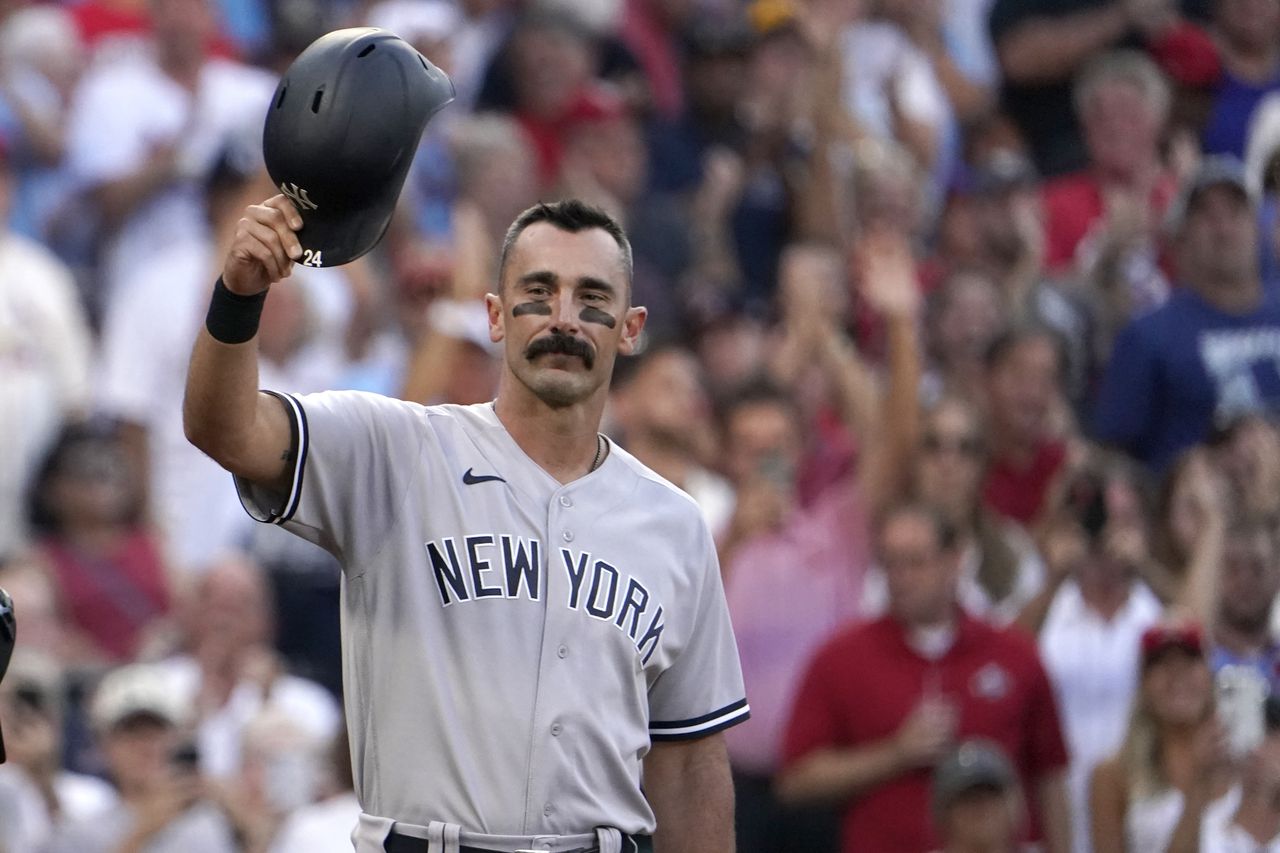 I’m a bit late here. Life gets in the way. But Monday Matt Carpenter fouled a ball off his foot and is now out for an indefinite amount of time with a fractured foot. Now that I have had over 24 hours to catch the sky that is falling here are things that I am thinking.

How the fuq did we get here?

When Matt Carpenter got added to the active roster I found out on SI.com. Who finds out news there? I posted in our group slack channel and nobody said anything for another 16 days. The stache seemed like “random Yankee” trivia fodder. But then something happened. Matt turned into Barry Bonds. I’m not kidding. Look:

I have to do one more:

So basically when they’ve been on the field, the Yankees have had arguably the 3 most valuable players in baseball on a rate basis lol

The dude was in Triple-A for the Rangers. On the verge of being out of the game. And then we were here, playing hero ball for the best team in the league (at the time). Every day he wasn’t in the lineup was a sin committed by Aaron Boone.

We went from “how is this guy on the roster” to “how can we survive without this guy?” in a few months. Amazing. Best story in baseball this year, no? If this is it for Carp on the Yankees (plz, no) we will always have this streak. 2.3 fWAR in 154 plate appearances. Tied with Anthony Rizzo and ahead of Luis Robert, Marcus Semien, Bo Bichette, Matt Olson, Trevor Story, and many others. Waiver wire / minor league free agent Hall of Fame.

Do we see him again?

I’ll admit I immediately Google’d foot fractures when YES announced it. Turns out standard recovery without surgery is 6-8 weeks. The comparison that has been thrown around Twitter is Riley Greene who missed seven weeks without surgery earlier this year. Difference is Greene is 21 years old and Carp is 36. Spring chicken versus … seasoned chicken?

But let us play along here. We shall pretend it’s apples to apples and it’ll take seven weeks for recovery. That puts us at 9/26 against Toronto. The longer version of that timeline (eight weeks) puts us at 10/3 against the Rangers which is the last series of the season. Not ideal.

Best case scenario and we’re pushing up against the end of the season. The Yankees can send Matt to Tampa and run him through some simulated games to rack up at-bats but its not the same. In game experience in the bigs can’t be simulated. That being said, if it’s even close I think Carp is on the postseason roster if he is healthy. His role might have changed from probable starter to pinch hitter but would I rather any other guy on the 40-man than him pinch hitting? Not really. Even with the limited recent exposure. I’ll take my chances with him poking one to the porch over the available field.

What about next year? Carpenter’s famous comment about being willing to carry equipment for the Yanks makes this obvious. At least from my perspective. He loves this team. It’s not one sided either, the team obviously loves what he has brought to the squad both on and off the field. I revert back to my comment about him almost being out of the league.

A one year deal makes sense for both sides. Even if Carp isn’t a perfect fit he’s made himself fit as best as possible. Stanton, Judge, x, y, and z might always get at-bat priority. But pinch hitting Barry Bonds has a fit with the short porch. Give the man $3-4 million and if the lightning in the bottle never strikes again they move on. I don’t think the negotiations have to be too complicated here.

Ok, so how DO we survive?

Now the tough part. With Giancarlo Stanton still recovering and Anthony Rizzo trying to get healthy what do we do now? Carpenter was batting in the top third or half of the lineup every night and now is just … gone. It’s not easy to replace a guy that was statistically amongst the best in the majors as a hitter. There is no sugar coating this one.

The Yankees called up Miguel Andujar in the short term to take his roster spot and that is the right move. I, like everyone else, would love to see Oswald Peraza called up and replace IKF. But that isn’t happening and this injury doesn’t change that. Miggy has been raking at Triple-A all year and does not deserve to be there anyways. Andujar is hitting .293/.337/.498 with a 118 wRC+ with the Railriders. He’s only striking out 11.2% of the time!!! Migs is bored.

I understand the way of the Yankee fan even if sometimes I wish I didn’t. The team struggles and we pick the weakest link and holler for replacement. But calling Peraza to replace Carp isn’t it, man. Miggy is the Yankees closest equivalent to Carp and that is why they recalled him. I think some of you forget what Miggy is capable of. I hope he rakes because I love Andujar. He’s going to make a great Red Sox next year (just watch). The Yankees need dudes who can rip and Miggy can rip. He’s shown that in the majors, even if it’s been a while. Peraza coming up solves a problem that is not solved by the Carpenter injury. Roster construction isn’t as hard as it seems, ya’ll. I promise.

Enough of the short bench

I’m tired of the YES graphic showing the available players and it’s been one and a half games since the fracture. First off, why not just IL Rizzo if he’s not playing for 5+ days? I’m not going to ramble about that here. I am here because time and time again over the years the skill set of Andujar is an obvious fit on the bench and yet he is stashed in the minors.

I am hoping this injury changes that. Even when Stanton comes back there is room for Andujar the way there was for Carpenter. Tim Locastro is cool in some ways but he is not a fit. The fact they put themselves in a position where Locastro had to hit third for an entire game is embarrassing.  For a team that has to pinch hit for its shortstop or catcher every time it is losing it makes no sense to keep Miguel in the minors.

This is my official petition to end the madness. Andujar belongs in Carpenter’s role and theres no telling me otherwise. Marwin Gonzalez is not the dude you want to send up there when you need a hitter. If you wish to convince me there is a better pinch hitting option in the organization I will listen but I doubt you will convince me.

This is undoubtably Miguel’s swan song with the Yanks and I am glad he gets one more hack at it. It is unlikely there is anything he can do to change his fate in the Bronx. But I hope Miggy doubles carves out a role with this opportunity and earns himself a big league contract next year.